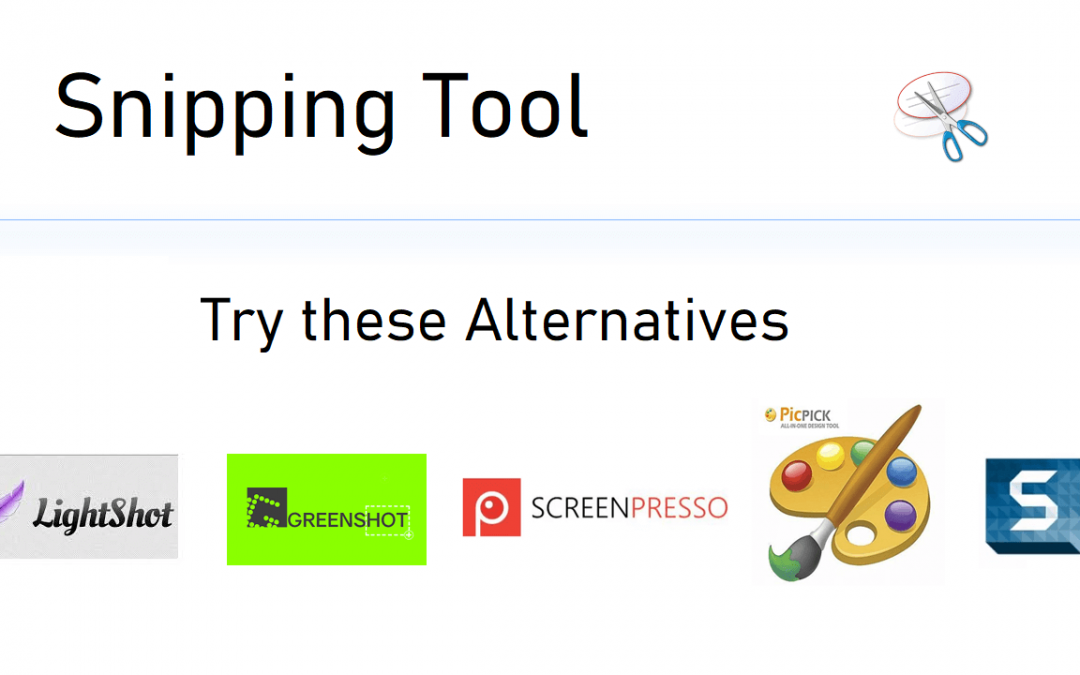 Snipping Tool has been a primary tool for Windows users to capture the crucial things on the screen. From Windows Vista to Windows 10, all desktops and laptops have Snipping Tool as a built-in tool. However, the tool has not been improved too much from its release date. In the latest version (Windows 10), Snipping Tool has been replaced with another tool named Snip and Sketch. Due to the lack of advanced features, users are searching for a snipping tool alternative for taking screenshots on Windows devices. If you’re one among them, here is the guide to choose the best one for your computer. These tools are selected in accordance with the following things:

Without any delay, let’s have a look at our top 8 best alternatives for Snipping Tool.

Inarguably, Snagit will be the best premium Snipping Tool alternative that you can find for Windows platforms. Developed by TechSmith, it also supports screen recording along with taking screenshots. The tool costs a one-time fee of $49.95, and it is also compatible with macOS devices. For new users, the developer offers a free trial for 15 days. The major highlight of having Snagit is that the scrolling capture lets you take a screenshot of the entire webpage even when a part of the web page is not visible on your screen. It also has several built-in tools to edit the screenshots. Download the app, set up a hotkey, and start snipping the important things on your screen.

Even though Snagit is an advanced tool to take screenshots, it may be an expensive one for some users. Lightshot is a freemium tool where you can expect all the features that are available in Snagit. The application is straightforward to install, and the simple interface makes it ideal for all kinds of Windows versions. By default, Lightshot will work by simply pressing the Print Screen Key. But, you can also assign a specific hotkey for Lightshot by visiting its settings page. After taking the screenshots, you can customize it by adding text, highlighting important portions, and a few more. You can also upload images to the cloud, or you can share them directly via Gmail. Overall, Lightshot is our personal favorite Snipping Tool alternative free for users who want to take screenshots regularly. It is also available for macOS.

Greenshot is a familiar name among the Windows users. It is another freemium utility to take a screenshot on Windows and macOS devices. For macOS users, the tool is officially available on the Mac App Store. Being an open-source application, Greenshot lets you customize the screenshots with various tools. Unlike Lightshot, Greenshot presents a separate editing dashboard to edit/annotate the screenshots. Greenshot is one of the few screenshot tools which supports sharing screenshots directly on social networks. Moreover, the app is compatible with all versions of Windows. Greenshot also supports assigning hotkeys for different screen capturing modes.

In general, PicPick is an image editor. But, artists and graphic designers can use this Snipping Tool alternative on Windows to screenshot the important things on their screen. The tool comes with various editing features that you can’t find on any other apps. It includes adding a watermark, brightness controller, color picker, motion blur, magnifier, protactor, color palette, and many more. The integration with Microsoft Office, Facebook, Box, Google Drive, and Dropbox extends its storage functionality to a new level. PicPick is available in two versions: free and paid. You need to unlock the premium version ($29.99 – one-time fee) to remove ads and access advanced editing features.

Like Snagit, Screenpresso is an advanced tool to take screenshots and record the screen. It has various features like different screenshot modes, adding watermark, assigning hotkey for different modes, scrolling capture, integrated sharing, and many more. Also, use this tool to record your screen in HD quality. Screenpresso is also available for iOS devices. There are three different versions available: free, pro, and enterprise. The pro version is ideal for freelancers and small groups. Whereas, the enterprise version is ideal for companies. Like other apps, the premium version provides more features than the free version. Overall, Screenpresso is more suitable for professionals.

TechSmith Capture is yet another screenshot tool owned by TechSmith. Unlike Snagit, it lacks some of the advanced editing tools. But, the simple interface lets the user take screenshots quickly and easily. Initially, the app has supported recording audios/videos along with full-screen snips. But, the support has been removed by the developer. It looks far simpler than the Snipping Tool, and you can use all the features of this tool without any confusion. Jing is also available for the macOS systems.

DuckCapture is a free and full-fledged tool that comes with four different modes to take screenshots. It has a scrolling feature to capture the entire web page. The editing dashboard features various tools to add annotations and highlight informative text. Once you finished editing, you can save the file locally or print out directly. The screenshots can be stored in different formats like BMP, JPG, and PNG. Apart from Windows, DuckCapture is also accessible on macOS.

ShareX is our final alternative to replace Snipping Tool. Being an open-source program, ShareX lets you screenshot any part of the computer screen. With a single tap touch, you can take screenshots and save them to the clipboard. When the image is copied to the clipboard, you can paste it on word processors, web browser window, graphic editors, or save it locally anywhere on your computer.

You can also find other tools like Droplr, CloudApp Screen Grabber, Screenshot Captor, Irfanview, Skitch, and more. While comparing with the Snipping Tool, these tools provide high-quality screenshot modes and editing features. Try these tools on your Windows computer and comment on your favorite one. In case, if we have missed anyone of your favorite Snipping tool alternative, mention it in the comments section.