How to Use Snipping Tool for Mac: Ways to take Screenshots 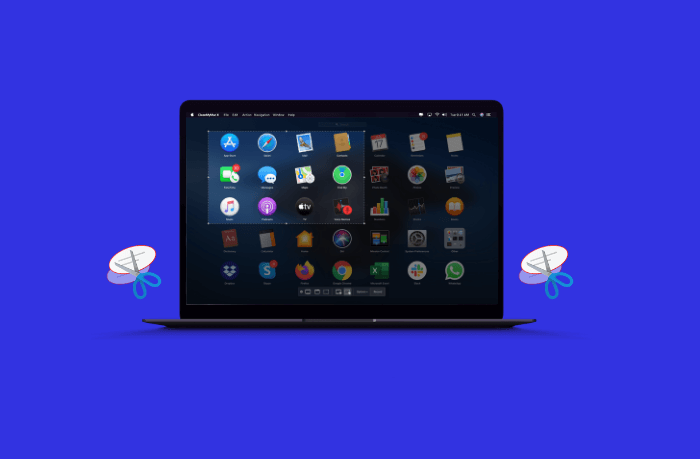 With Snipping Tool and various alternatives highly popular among the Windows users, most of the Mac users are searching for ways to take and edit screenshots on their machines. Is there a Snipping Tool for Mac? The answer is No. In General, Mac devices don’t have a Snipping Tool. But, Mac has a built-in screenshot utility in the name of Grab. Like Snipping Tool on Windows, Grab comes with different screenshot modes, editing tools, and keyboard shortcuts. Apart from this, you can also download various Snipping Tool alternatives to snip your Mac screen. First of all, we will discuss how to use the Grab to take screenshots, and then about the third-party tools.

How to Take Screenshots on Mac using Shortcuts

As we mentioned earlier, the built-in snipping tool on Mac (Grab) has certain keyboard shortcuts to take screenshots directly. Unlike the Snipping Tool on Windows, you don’t need to launch the app to snip the screen. To customize the shortcuts, go to System Preferences > Keyboard > Shortcuts > Screenshots. By default, the screenshots will be stored in PNG format. Grab also supports changing the output format.

To take a screenshot of the entire screen

To take a screenshot of a particular area/portion

To take a screenshot of a specific window

To take a screenshot of the touch bar

After taking screenshots, open the window that you want and press Command + V to paste the screenshot.

Note – Users with devices running macOS Mojave and later can change the default location for storing screenshots from the options menu of Grab. You can launch Grab from the Utility folder.

The users can also take a screenshot using the app. Just press Command + Shift + 5 to launch the screenshot app.

Use the trackpad or mouse to select the tool that you want and click Capture to take screenshots.

Like we said earlier, you can also download third-party tools or Snipping tool alternatives to take screenshots. There are many apps available on the Mac App Store to download. Here, we have provided you with the top 4 best options.

Cleanshot is a reliable and premium screen capturing tool for Mac platforms. Like LightShot, it has cloud storage support to save the screenshots online for future use. It comes with annotating tools like Crop, Pencil, Highlighter, Counter, and Filled Rectangle. Like Snipping Tool, you can delay your screenshots up to 10 seconds. The screenshots can be stored in different formats like PNG, JPG, GIF, and more.

In general, DropShare is an advanced file sharing utility for macOS. But, you can also use this app to snip the important things on your screen. Like the above-mentioned tools, you can upload the screenshots to Dropshare Cloud (10 GB storage). You can also upload it to other cloud services like Dropbox, Amazon S3, Backblaze B2 Cloud Files, Google Drive, Rackspace, etc.

Capto is an advanced tool to capture screenshots on Mac with one click. Apart from this, it also functions as a screen recorder, video recorder, and video editor on your Mac. The features of Capto include File Management, integrated social networking, built-in screenshot editor, and more. You can use this app to snip full screen, rectangle area, circle area, freeform area, single window or menu, webpage, and more.

The built-in screenshot tool on Mac is handier to take basic screenshots on your screen. However, if you want more annotate and sharing features, use the alternatives as mentioned above. Did you find any other interesting Snipping Tool alternative for Macbook and other mac devices? Please, mention it in the comments section. We will review and add it to the article.